A shooting buddy was helping his son do some cleaning around the house and they made a pile of various types of ammunition that neither of them use anymore.  Rather than go through the hassle of trying to sell it box by box, they sold it all to me. 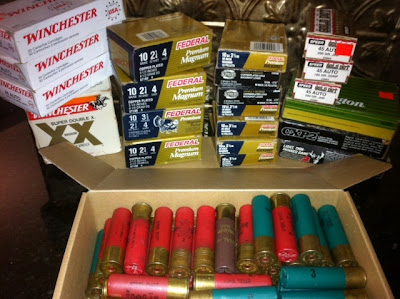 I got it all for less than the store price for just the 45 ACP in the pile.  All of the shotshells are 3 1/2" Ten gauge.  Mine has 2 7/8" chambers so I may dismantle them for the components and reload them for my gun or I may just give them to some duck hunting buddies.  Probably some of both.  There's eighty-five loose shells in that box.  There's also a  box with several hundred once-fired paper 12 gauge hulls in the deal.  It wouldn't fit in the picture with the rest of it.

That inspired me to clean out my car and I found a few interesting things there. 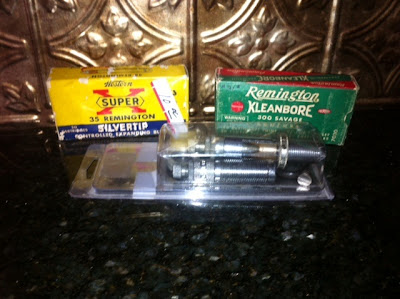 A box each of 35 Remington and 300 Savage along with a set of Herters dies.  They are the ones with the window in the seating die so you can make sure the bullet is going in straight.  There was also a partial box of Winchester White Box 45 ACP but it doesn't count because I hadn't forgotten that it was there.

Then the local Gooseburg actually had some of this in the powder locker this morning: 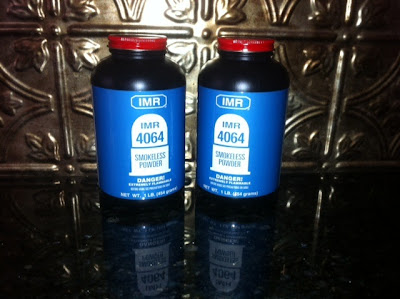 They also had several cans of  4831 in IMR and one in H.  This was two days after the delivery came too.  The best part was the price.  Back in pre-ammo drought days, they always seemed to be a good bit higher than everyone else.  Having seen powder on GunBroker selling (yes, selling;  not just asking) for $80 a pound, I was prepared for almost anything but the price was right where it was priced last fall.

That's good to hear. I plan to use it in something similar. As I have drifted back to the older cartridges, I seem to have less "need" for the latest gee-whiz powders and find that the IMR stuff still does what its supposed to do.