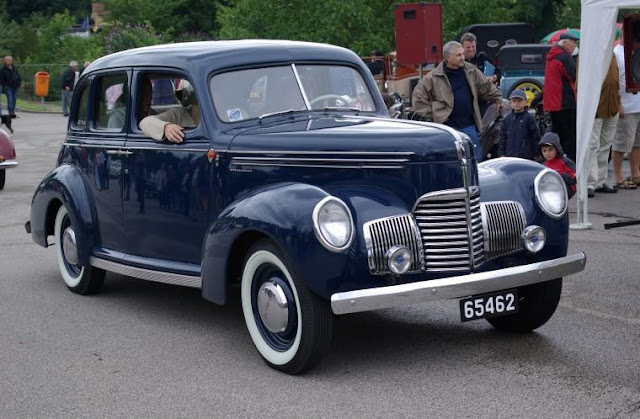 1939 Studebaker Champion.  The car that saved the company just prior to WW2.  The engine was designed for fuel economy.  The engineer's mantra was "weight is the enemy."   They managed to build a robust little engine that did get good mileage for its day. 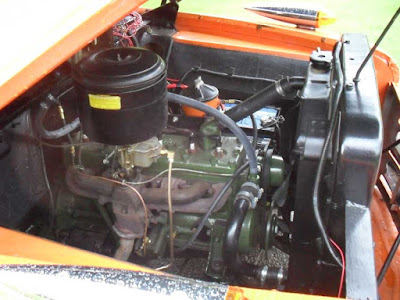 Eventually converted to overhead valves, the engine stayed in production until Studebaker quit building their own engines at the end of the 1964 model year.  The original engine powered the military Weasel too. 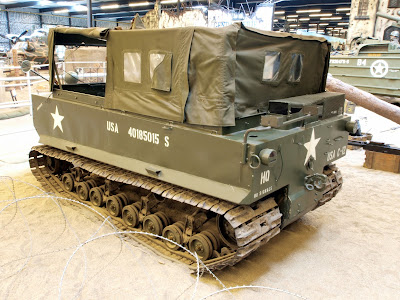 Posted by Lantry at 5:59 AM No comments:

An Infidel and an Odyssey, Part 1


A couple of Thursdays ago, I stopped by the LGS that's sort of kind of on my way home from work if I go about five miles out of my way.   I try to get by there every month or so just to see what's new. 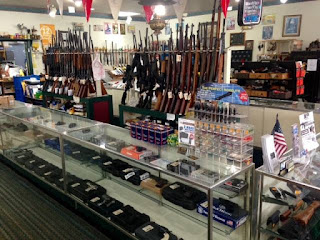 Wasn't really looking for anything but they had some new reloading stuff on the shelves and I did need to get some .451" jacketed bullets for the Glock.  They had a couple of boxes of Speers.  The thing that I like about the particular bullet that they had in stock is that its designed for the 45 Colt but will  work in an autoloader unless the feed ramp is rough.   One bullet will work for many guns.

On my way to the payin' counter, I noticed a little Charter .38 Special and a couple of Ruger LCRs in the display cases.  I made a mental note to tell The Lovely Bride in case her friend from work, Aunt Clickity   might be interested.

Saturday morning came right on schedule.     It was shaping up to be one of those days when you just can't seem to get moving so I suggested to TLB that we buzz on over to the gun shop to check out those snubbie revolvers in case Aunt Clickity might want one. 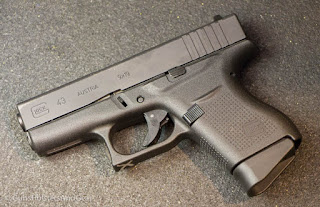 Anyway, it was the first one either of us had ever seen in person.  She held it, clicked the trigger once (with the clerk's permission) and said she really liked it.  We looked at the two Ruger LCRs and a S&W Body Guard with a laser, she texted Aunt Clickity and we headed home with me thinking that our mission had been accomplished.

I don't blame her.  The 43 is a nice little gun that Glock should have made twenty five years ago and this one was even  the Rural Model.   (It has the sights on top of the slide).   I suggested that she wouldn't be the only person in town that would  like it, mumbled something about Fortune favoring the bold and we were back in the car, credit card locked and loaded.

She bought the little Glock and texted Aunt Clickity about it.  By Sunday Morning, TLB had half a dozen texts from Aunt Clickity wanting to know if the shop was open on Sunday and could we meet there after Church and could she bring another co-worker along.

We met the two ladies at the shop at 10:00 Sunday Morning and were in for a surprise.   Unknown to use,  the second co-worker had been there Friday asking about a S&W Body Guard with a laser like this one: 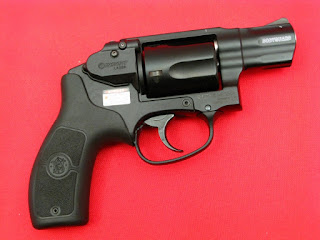 It hadn't arrived until after she left on Friday but there it was right on the top shelf in the display case Sunday Morning.   Sometimes the planets or the ducks or whatever need to line up to make things happen actually do line up.

Aunt Clickity liked the S&W  but was more interested in an LCR with a titanium cylinder like this one: 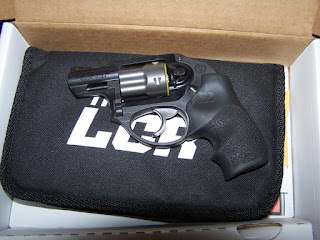 It had a very smooth trigger pull and the grip didn't hurt her arthritic hands.   She did some of her trademark clicking but this time it was with the sales girl's permission and she kept the guns pointed at the floor.

Pretty soon, co-worker #2  had her debit card and carry permit out and was doing the paperwork for the Smith.   Aunt Clickity was going on about how she had just bought a new car last week and shouldn't spend the money but the thing with the Ruger that she liked was it was a used gun.   It looked brand new and came with the box and all but there wasn't going to be another one like it at the same price later on.  She decided that it was now or never and out came her checkbook.

Sometime during all of that, I bought a box of 115 grain Speer hollow points to load  for the new Glock too.

Three guns sold in two days and TLB has two newly  "gunny" friends at work just because I had a few minutes to look around at the LGS on my way home and remembered her Aunt Clickity.   Nice to know I have that kind of power.

As happy as I am about them getting their guns,  I'm having a hard time accepting that we are a two-Glock Family now.  I feel like Phil Robertson when he and Miss Kay got a cat:  Its all downhill from here.

Besides not being able to shoot good old Plumbium through them, my Glock has adjustable sights and TLB's has fixed sights.   I can't figure out how to make either set run.   I know they do run somehow because I read about people running this sight or that sight on their Glocks all the time but mine just sit there on top of the slide. (Mine's a Rural Model too).   I can't even tell how to get the sights to crank up, much less run.   Then there's  "operating."   The more I  read, the more it looks like we will probably have to learn to do whatever that is  too.  1911s are never this complicated.   Maybe there's a group about it on Assbook.


To be Continued.
Posted by Lantry at 5:04 PM No comments:

Improvise and Overcome - An Interesting Story 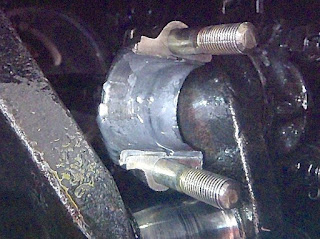 They drove almost 600 miles on a rod bearing made out of leather.   I don't know if it would work on a more modern engine but I did read that during WW2 a U-Boat had bearing trouble in the middle of the Atlantic and they used the tin foil wrappers from the crew's cigarette packages to make emergency repairs to get home.

From  The Old Motor.

Sometimes its amazing what you can do when you have no other choices. 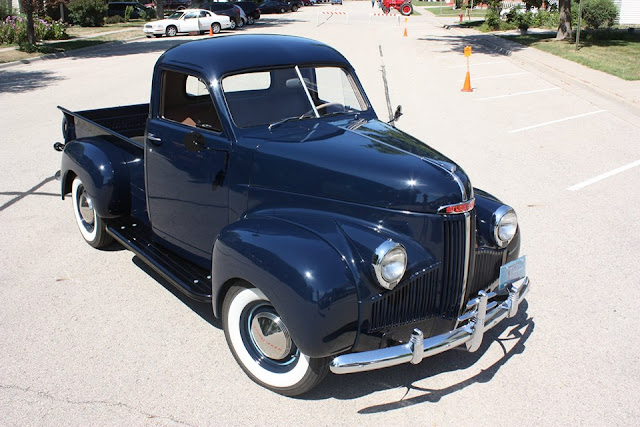 Something without cleavage this time.

Beginning as a builder of wagons in the 1850s, Studebaker progressed from Prairie Schooners and buggies like the one in Gone With The Wind to electric cars and finally gasoline powered cars and gasoline and diesel powered trucks.   They built heavy trucks as well and hundreds of thousands of military transport trucks that were shipped to the Soviet Union during the Second World War so Stalin could concentrate on building tanks.  At one time, prior to the Great Depression of the 1930s, Studebaker was the #2 builder of cars in the Country.  Their electric cars were never recalled either.  That might be because they were not known to spontaneously burst into flames.

They did some things that they didn't have to do like using roller bearings on their axles instead of ball bearings and replaceable rod and main bearings in their engines fifteen or twenty years before Chevrolet.   They used a harder iron in their blocks than they needed to use.  (That made their piston rings wear so they often smoked before they really should have.   The local machinist that I used back when I had my Studebakers hated to seem me dropping off a block because they were a pain to bore).  That and the fact that they never took a strike and always caved into union demands drove their costs up to where, by the 1950s, it cost them several hundred dollars more to build each car than it cost GM.

By the late 1950s, they were producing some innovative designs with high performance engines but their quality was also slipping.  Machinists have told me that they can tell when a Studebaker block was made in the 1960s because it will have more flashing in the coolant holes than an older block.

Management decided to diversify during the 1950s and they got into several different industries.  Most notably, Studebaker-Worthington, who built nuclear reactors for power plants and other heavy construction.

They had one of the largest foundaries in the industry and by the early 1960s they weren't building enough cars and trucks to support it so they started buying Chevrolet engines from GM's Mckinnon Industries plant.   They shut down their plant in South Bend Indiana with the end of the 1964 run and became an import, building what they built their last two years in Canada.
Posted by Lantry at 6:46 AM No comments: