I Miss Out On All The Fun

What Bubba Knows   has a series of posts entitled Don't Feed The Moonbats.  In those posts he tells which moonbat is in which movie so you know not to put any money in their pockets by going to watch it.

The trouble is, I have been boycotting almost all movies for close to twenty years.  Partly its because I don't want to put money in the pockets of people who hate our Country or who support those that would take our rights away buy also because not very many movies interest me anymore.  All I have watched in the last twenty years was Enemy at the Gates and the new True Grit.  Nobody's gonna notice if I officially boycott Hollywood.

I remember the first time I ever heard a Rap song.  It was some POS remake of Aerosmith's "Walk This Way."  It was so bad that I thought it was a couple of radio hosts making some kind of weird joke until I heard it a second time.   There's no such thing as Rap Music.  Its not music.  Its a beat with somebody blabbering a bunch of stuff designed to shock their grandmother but its not singing and its not music.   I'm supposed to boycott some Rapper because of his racist remarks but I'd have to start listening to Rap in order to stop.  That ain't happening.

Now I have to boycott Food Network because of their firing of Paula Deen.  I think they are a bunch of small-minded, self-righteous, simpering jerks for doing that but I can't boycott them because I already don't watch them.   I don't even watch them to see that Italian lady that wears the low cut blouses all the time. 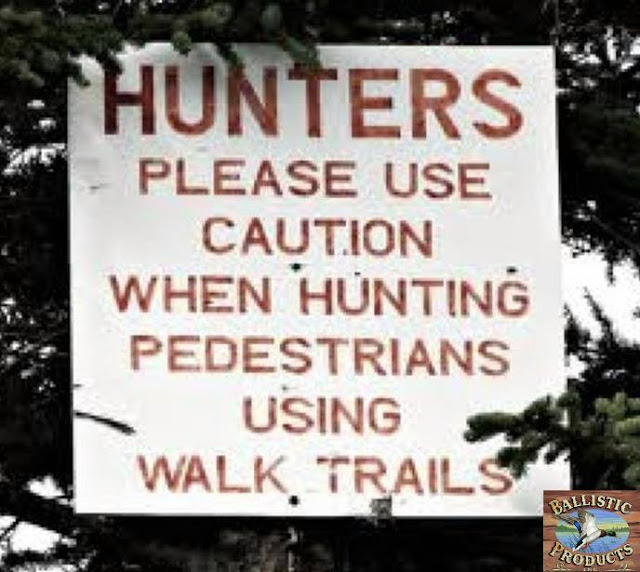 I guess you might shoot through one and hit somebody hunting farther down the trail.

When I was a kid, we'd go visit my Grandparents in Gainesville on Sunday afternoons almost every week.  We'd head up Highway 441 and we'd always pass a concrete block building that had a big black and yellow billboard out front that just said "GUNS."  One time, my Dad let himself get too curious and we stopped to check it out.

Holy Moly!  The proprietor was retired cop from someplace up North and he had him some guns.  His name was Harry Beckwith.  He had a collection of Lugers on display and the walls were lined with guns, ammo, holsters and more stuff than a little kid could imagine.  It was like opening King Tut's tomb  and finding it full of guns.  I was hooked.  That was the only time I ever went into the original shop.  Turns out, the store was about to move down the road a little to a bigger place the he had just built.  The original shop burned down right after the move. 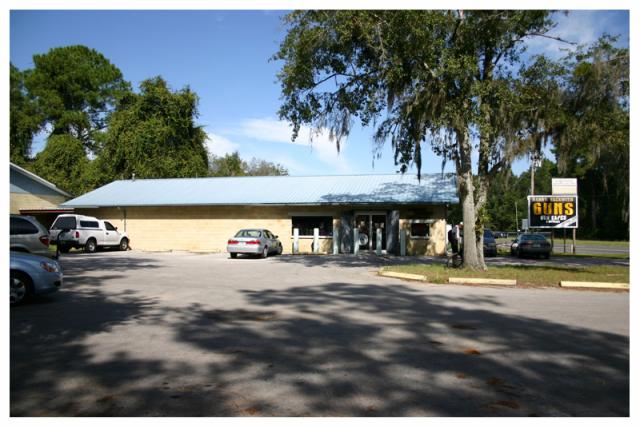 I grew up with Harry Beckwith's new shop.  My oldest brother bought his first honest to goodness bought-it-with-his-own-money rifle there and I bought my first pistol there a few years later.

Over the years, I bought a double barreled .410 that I wish I still had and I bought a Lefever Nitro Special that I wish I didn't.  I bought my first Lee Loader, bullets and powder there.  Harry wouldn't sell me the powder until he had looked at the chart that came with the Lee Loader to make sure it was on the data sheet.  He knew I was just getting started and wanted me to get started right.  Harry was like that.  When you needed some part or a die for some strange caliber that hadn't been made in 60 years or something off the beaten path like clips for an Italian Carcano, chances were good that Harry would have it.

I used to make it a point to drop in just to check the place out whenever I was in the area.  As I got older, it became the last place on earth where I would be greeted with the words "Hello There Young Man."  Smoke hung in layers and you'd smell like cigarette smoke all day if you stepped inside but that was just part of what made it "Beckwith's."  It didn't matter what you needed.  It was there, somewhere.   It was like going back in time.

I was in the area one day a few years back and Harry made me a decent price on a nice looking Remington Model 8.  I didn't have the cash on me and told him I'd have to come back.  It was less than a week later when I returned to find the shop closed for the day.  Mrs. Beckwith had died.   I remember thinking how strange it was that I'd cloud up like I did over someone that I had never even met but Beckwith's was part of my childhood and she was part of Beckwith's so it made sense on some level.

I did go back and buy the Model 8.  Harry was there.  You could tell that he was hurting but he  was there.  I suppose it was good for him.  Even after all that had happened to him over the past week or ten days, he remembered the price we agreed on.  After that, I'd keep making the trip to get stuff like dies for oddball cartridges, scope mounts for obsolete rifles and sometimes just to be called "Young Man" again.  Sometimes The Lovely Bride would sit in the car because of the smoke but she'd never complain about it.

Just a few years after I bought the Model 8, about 2006 I guess,  I dropped back in and the smoke was gone.  The piles of antique God-knows-what-all were gone and nice, orderly racks full of used rifles and shotguns were there in their place.  The back of the shop was set up with scope bases and rings and a little work room for mounting them.  All the price tags still said "Harry Beckwith Gun Dealer" on them but the place was different.  It just didn't make sense.  Then I saw that the Lugers were gone.  Harry was gone too.  He had died from complications in some sort of surgery and the family had sold the business to the Picketts of Pickett Weaponry in Newberry.

Its still called Harry Beckwith's Gun Shop and I can't think of a better family to buy the business than the Picketts.   I'm glad its still there. Its still worth my stopping by.   Its just not the same.  You can breathe while you are in there.  There's not so much antiquated stuff stored all over the place just in case somebody walks in some day and needs it like I always did.  They sell more stuff that normal folks buy now.  They even have a Facebook page.  No chance anybody that works there will ever think I'm a young man.  Like Bob Seger said;  Turn the page.

I was thinking about taking The Lovely Bride and my niece up to the indoor range at Beckwith's next week  and ran across a story that Massad Ayoob had written about Harry and his gun shop a couple of decades ago.   Mostly its about a single incident that happened in 1976 when seven thugs in two stolen cars tried a smash and grab robbery and found themselves outnumbered and outgunned by a single scrawny little retired cop who wasn't about to let them kill him.  I say "mostly" because Ayoob does talk some about the shop and what it was like back in the day.

I raised the muzzle and a wisp of smoke curled out.  I opened the bolt and the auxiliary cartridge complete with the now empty .32 ACP case came out.  I looked down the barrel and saw nothing.  I saw nothing because there was no light.  The bullet had stopped in the barrel.

Light pressure on a cleaning rod pushed the bullet out so no harm was done.  Now I have to figure out if the problem is the jacketed bullet creating too much resistance or something else.

Why Didn't I Think of This? 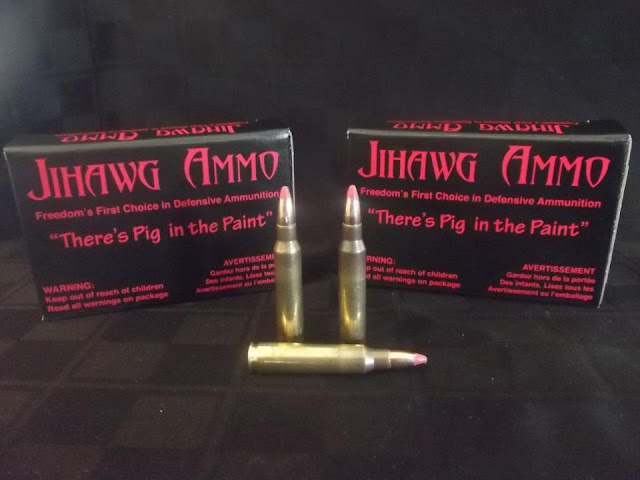 JiHawg Ammo
Posted by Lantry at 4:29 PM No comments:

But Words Will Never Hurt Me

Posted by Lantry at 6:16 AM No comments:

Went to Wacahoota to help a buddy and his parents deal with a raccoon problem yesterday and, once the ferocious beast had been relocated, we decided to do a little shooting.

Results were mixed.  The little Cooper 22CCM would shoot small enough groups but it shot them all over the place.  It would put a couple here, a couple there and then a few someplace else.  I figured it at somewhere between 15 and 20 MOA.    There being nothing wrong with the rifle or scope mounts and nothing that could be THAT wrong with the ammo, I suspect a busted scope.   While pondering what it might be besides the scope, I recalled that I had put that scope on another rifle a year or two ago and that rifle had behaved in much the same way.  Both rifles wouldn't bear false witness.  I suppose I will have to send that scope off to be repaired.

The little 25-35 Model 99 surprised the heck out of me.  We had set up a cardboard box with the target on it and behind that we had some pine logs about six inches in diameter.  (Behind that we had more trees, dirt, woods and a long way before any other houses).

I then tested one of my Pyrodex 12 gauge loads.  It did about what I expected.  Lots of smoke but it didn't hurt anything.  I have a video of it but its long and needs to be cropped.  I just spent over an hour downloading different free video editors and can't get any of them to open it.  That video will have to wait.

The big deal of the day was the 10 Gauge LC Smith.  I wanted to test out the loads I had assembled for it but I had never fired a damascus barreled gun before.  The loads were light smokeless loads that weren't supposed to generate even 7,000 psi.  I had five of them.

For the test, we set it up in a Lead Sled on top of a table and fired it by means of a long strand of mule tape.  I was confident that it would be fine but not over-confident.  We tested the right barrel and then the left.  When we loaded the left barrel, I forgot to tie the barrels back down to the Lead Sled.  The gun jumped just a little bit and put a nice hole in the turf  a few yards ahead of the table.


The  whole idea of these loads was to have a relatively heavy gun and shoot light loads so there wouldn't be a lot of recoil jarring what's left of the discs in my back and neck.  The tiny little jump that it made was encouraging. 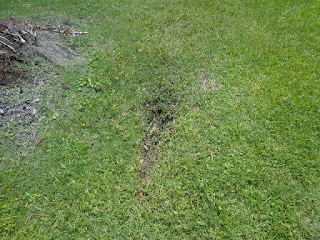 The gouge that the shot made in the yard looked promising too.

Subsequent field testing with the remaining 3 shells proved that it was up to any task I'd assign to my 12 gauge.  It kicked less than a .410.  Of course, it got heavy pretty quickly but that's part of the plan.   I may get some ITX shot and wads to go with it and have me a  gun for wabbit season and duck season.

Posted by Lantry at 7:44 PM No comments: 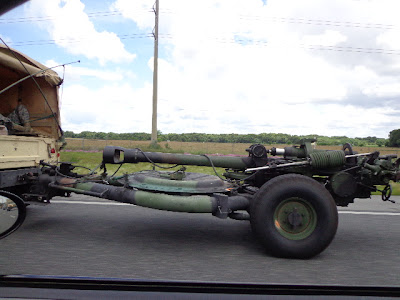 Passed a convoy of these today.  Don't see stuff like this around here much.
Posted by Lantry at 7:24 PM No comments:

Twin sisters fight over salad dressing.  One got a really good forking out of it.

You can't make this stuff up.  You just can't.


Go read the article. You'll thank me.
Posted by Lantry at 5:27 PM No comments: