The old Jeep continues plodding down the road to reliability.  This weekend we said goodby to the old brake proportioning valve and the brake lines.  The old one leaked and since that wasn't a big enough PITA, one of the new exhaust system's pipes rested on the valve.  The same pipe followed the frame about 1/4" from the brake line all the way back to the rear spring.  Worked fine until we got in stop  and go traffic and the fluid started to boil.

The driveshaft continues to be troublesome.  The yoke is still binding even after I relieved the hell out of it.  There's nothing left to relieve so I will have to have a CV joint driveshaft made.  I told the driveshaft guy that's what I wanted but I let him talk  me out of it.  The yoke for a CV joint is a flange and they are hard to find for the Dana 300 transfer case so we tried a regular driveshaft to see if it would work.  We saw.  It won't.

In the mean time, there's some really annoying chatter with the drivetrain in a "float" situation.  When neither under power nor coasting it makes a hell of a noise.  Fortunately, I have a box full of Dana 300 bearings and seals and I have two spare transfer cases.   This evening I drug out my $5.00 spare transfer case to dismantle and see if its worth rebuilding.  Nothing but the best for my Jeep! 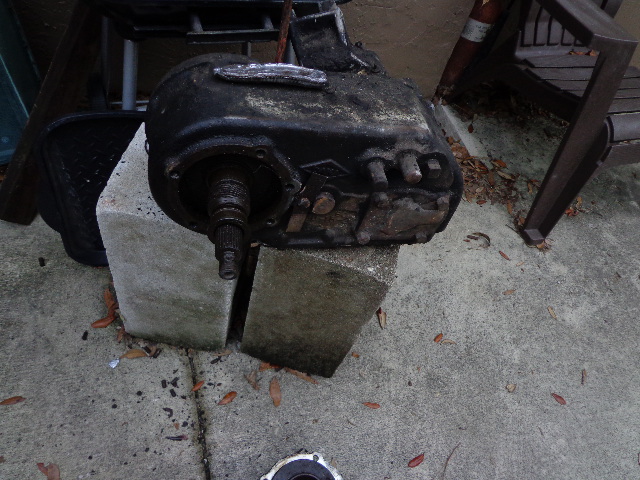 It doesn't want to be dismantled.   That's why it was only $5.00 at the Jeep show.  The shiny thing on top is a lead ingot.  I use a cornbread mold to cast the ingots for my bullet casting.  Here I'm using this ingot to cushion the gentle rapping of a 4 pound hammer.   The little dark specks on the concrete in front of the lighter colored concrete block are the bearings from the output shaft housing.  The races are stuck on the output shaft and in the housing.  Same for the input shaft and housing.  If this doesn't work, I'll have to try my $10 spare.  If that doesn't work, I can always do what normal people would do and pull the transfer case that's on it and rebuild that one.  Trying to avoid that because there will be a lot more down time that way.

The steering is an entirely different story.  Last year I put a reinforced mount for the steering box on it.  The original mount is three stamped pieces of steel that are designed to flex and come loose.  The new mount is a heavy cast iron clamp with a big fat bolt that runs through it to clamp it to the frame.  I tossed the factory steering shaft and put on one that has real needle bearing universal joints at each end and put a new bearing in the bottom of the steering column.  There's no slop. No free play.  Nothing.  No more turning the wheel 1/4 of a turn before anything happens.  Its like the steering wheel is actually connected now.

It starts and runs better than I remembered.  Its fun to drive.  Once the driveshaft and the chattering are fixed, it will really be a good thing to have around.  It has an HEI distributor in it  but I saved the old breaker point distributor, coil and coil wires.  I can make it EMP resistant in about 15 minutes.  The Norks can kiss my butt.
Posted by Lantry at 7:37 PM