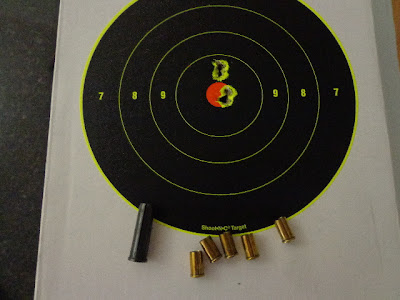 The .32 S&W adapter works pretty well.   The top group is three shots offhand at 20 yards.  It looks like a two-bullet hole but three went into it.  If I hadn't heard the bullets hit the cardboard box holding the target, I wouldn't have been sure myself.  I decided that nobody would believe it if all five shots went into the same hole so I dropped my aiming point for the last two.  Now I figure nobody will believe I intentionally shot it this way.

It ain't gonna win any shooting matches but it sure looks like any squirrel or rabbit within range of a shotgun would be in serious danger from a small pistol cartridge fired from a rifle.

Besides being easier to carry than a gun, these are incredibly quiet.  I'm serious when I say that I heard the bullets hit the cardboard box.  One could conceivably shoot small game in suburbia without disturbing the neighbors.  It's quite slow to reload because you have to snap the spent case out of the adapter and snap a new one in but that's only a problem if you miss.
Posted by Lantry at 6:46 PM