A resident of a populous southwest Ocala neighborhood said he was attacked by a pack of coyotes Tuesday night just feet away from his front door. 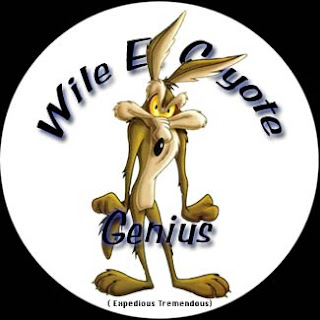 Jack Miller had just stepped into the muggy summer night to walk his poodle, Tinkerbell, and his Maltese/Chihuahua mix, Jax, when between five and eight coyotes surrounded him and began lunging at his tiny dogs.

Miller said Tinkerbell jumped between him and the coyotes "like a pitbull" to protect him, while Jax cowered behind him and darted in circles by his ankles.  He managed to punch one of the coyotes but said he couldn't fend off the yipping animals, which were coming at him from all sides. One grabbed Jax and bolted off.

A few years ago, I appraised a house in the same subdivision.  The homeowner was getting an equity line to pay for a fence because he had seen a coyote watching his two children while they played in his back yard.

I've seen 'em in broad daylight, at dusk  and at night.  They are everywhere.  Too bad donkeys aren't legal under the zoning in that subdivision.

You can pave it, develop it and pump it dry but you ain't never gonna tame Florida.  More people need to understand that.
Posted by Lantry at 4:37 PM

I live over in Mims and have never seen or heard of any coyotes over here.

Interesting. I'll admit that my regular wanderings don't take me farther North than Madison or farther South than Lakeland but I do manage to hit both coasts from time to time. People in all those areas have told me they've seen them. Mims is a place I'd sure have expected them to be.