I had planned to take part of this morning to do a little shooting over the new chronograph.   The weather girl must be anti-gun because a lot  of rain rolled in.   We were under a tornado watch most of the day.

The weather wasn't much of a problem.  It did pour and there was a lot of wind but I was shooting under a roof  in the lee of a building so it wasn't so bad.  The trip's purpose was chronographing several different loads in three different rifles to see how identical loads in different but similar chamberings would behave.    In other words, I wasn't there to shoot groups so the wind didn't matter.  My only accuracy parameter was to fire 60 - 70 shots across the chronograph without hitting it.

There wasn't enough ambient light for the chronograph to read but I did have the forethought to bring the light set that I got for my old chronograph; the one that went wherever all my other socks go. 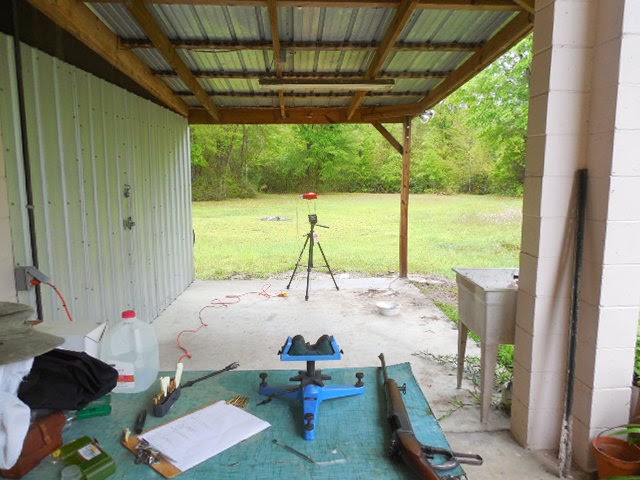 The lights are the old, gaia-molesting, incandescent lights.   I think I killed 3.1 Polar Bears using them.  They make the new ones with LEDs.  You can't use flourescents because they turn off and on 60 times a second.  You can't see it but the chronograph can and they get it really confused.  With the lights in place, the chronograph worked flawlessly. The only hiccup was when a flash of lightening caused it to misread one shot.


I haven't had time to crunch the velocity numbers to see what, if anything they tell me.   I did, however, notice that the 303 Savage loads with 125 and 150 grain bullets weren't very consistent and that it really settled down and became consistent when I got to the loads using the 170 grain 30-30 bullets.   It also liked the 190 grain Hawk bullets much better than the light weight bullets.  The 30-30 using the same four bullets and same powder charges and the 300 Savage using three of the same four bullets and its own powder charges showed no such preferences.

I  got to try out my portable loading rig too.  I didn't have enough pieces of empty 300 Savage brass that weighed close enough to each other to load all the ammo I needed at once so I had to load my last five shots at the bench.  I am very happy with the whole setup.  I had electricity and lots wind so I used the Lyman Powder Dispenser instead of the old powder scale that I have set up to go with the portable rig.  It really worked great.  It was like having my own loading room right there at the bench.  It was like that because that's what it was.

I also wanted to do more work on the front sight for the 1899 Savage in 25-35 Winchester so I took it along.   I recently did a lot of cleaning up and reorganizing in the reloading room and all my handloaded 25-35 ammo wound up in  the same place as my old chronograph and my other socks so all I had in 25-35 was a partial box of Remington factory ammo and I didn't try to shoot enough to actually sight it in. 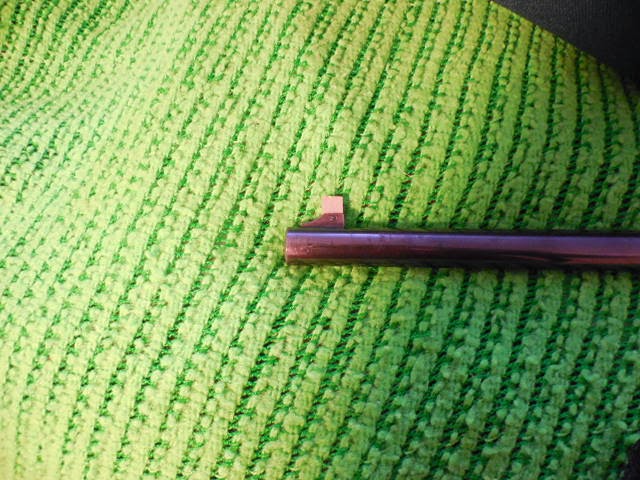 The rifle used to shoot incredibly high and I made a tall front sight blade for it.  I made it a good but higher than it needs to be so I could file it down and, quite naturally, it shot incredibly low today.   I'll do some filing on it and go back with my loading setup and work up a load.

I really like that little rifle.  Its older than the Titanic but in way better shape.  It weighs nothing, balances perfectly and its a take-down rifle with a spare barrel in 303 Savage.  What's not to like?  I mean, other  than the screwed up front sight and not being able to hit where I aim just yet.  On second thought, The Lovely Bride already likes it.  I better shut up before she decides its her's.  Ah...   Its a piece of junk.  So worn out its dangerous.  Can't hit a thing with it.  Too underpowered for squirrels.  Out of style.   Ya.  That's what I meant to say.  Really.

As a final little test to address something I looked at a few months ago, I chronographed one of my .32 S&W loads fired through the 303 Savage with the Marbles adapter.   It was actually kind of funny.  I still had my hearing protection on and it was so quiet  I thought it misfired.  Through my cheekbone, I "heard" the firing pin hit but I didn't hear anything else.   I looked at the chronograph and it said "655."   Opened the action and out came the adapter and empty .32 S&W case.   There was some unburned powder in the case so there's probably room for a little load adjustment but I haven't decided whether I want to do that yet.  I like it so much as it is that I don't want to mess it up!

Whatever the data winds up saying, the value and utility of the portable loading rig may be the biggest lesson I take from today's shooting.  If you can't shoot off the back porch, take your loading setup with you.  I can't believe how good that makes me feel about shooting again.   I can't wait to go back and actually work up a load at the range like we did in the good old days when I could shoot off the porch!