Shock Troops of the Confederacy 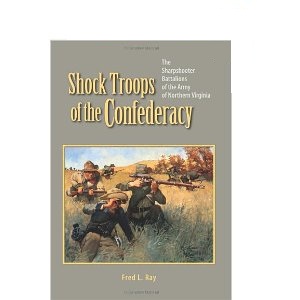 Just finished reading this and its good!  Usually, when an author gets into detailing which unit did what my eyes tend to glaze over and I lose interest.  I can honestly say that nothing like that happened while reading this book.

I'm going to let two of the Amazon reviews 'splain why you need to read it:

From a fellow named R.A. Grimm:

"Shock Troops of the Confederacy" is a somewhat misleading title as what is on offer is actually two books in one!

The treatment of the Sharpshooter record and legacy (both sides) is certainly well covered, it is in fact a broad ranging and compelling testimony of the efficacy of shock and open order tactics in the midst of a war in which often the blind led the blind; especially when they had the means to do otherwise. The battle narratives are tightly-written and coincides nicely with the maps provided.

However, the unaware reader who merely thinks of this book as a focused "Confederate Army" unit or battle study is in for so much more; one is unexpectedly offered an historical and international study of the rifle...Open order..evolution and impact on modern warfare. Therefore, I would have titled it something like - "The Rise of Modern Infantry - the Evolution of Rifle, Sharpshooter, and Shock Troops from the Civil War to the First World War."

I recently had the pleasure of reading Fred L. Ray's new book, "Shock Troops of the Confederacy - The Sharpshooter Battalions of the Army of Northern Virginia". It offered a great deal of new information whereby the author outlines the changes that took place within the Confederate army that led to a new style of warfare, a warfare in which the intelligence, skill, and courage of the individual soldier became paramount. In a book that takes the reader on a journey of discovery, out between the battle lines, Fred successfully illustrates the factors that brought about these developments.

Largely forgotten in the annals of time, the story of the Sharpshooters of the Confederacy begins with two Virginians, Robert Rodes and Eugene Blackford. Both men were from Lynchburg, Virginia, but through a quirk of fate, both entered Confederate service as members of the 5th Alabama Infantry Regiment. During the winter of 1862, Rodes and Blackford formulated a new military unit to serve the Confederacy that would change the course of the war and in doing so, change warfare itself. Invaluable lessons were learned by both men at the Battle of Boonsboro, also known as the Battle of South Mountain, where Rodes' Brigade successfully fought a delaying action against an entire Division of the Union army, thereby allowing General Lee to consolidate his army and fight the Battle Of Sharpsburg, or Antietam, three days later. These Confederate troops on South Mountain, primarily dispersed as a line of skirmishers, held off the advance of the Army of the Potomac by fighting from behind the rocky outcrops and the heavily wooded slopes as they slowly fell back. This single Brigade accomplished their objective and arguably saved the Army of Northern Virginia, however, they were mauled badly by the superior skirmish tactics of the Union forces. This became the impetus for change. Over the next few months, with the support of Robert E. Lee, General Rodes successfully organized and trained a Sharpshooter Battalion within his Brigade that would serve as a model for other units in the Confederacy.

Fred Ray documents the accomplishments of the sharpshooting units of the Confederacy from their baptism under fire at the Battle of Chancellorsville, to the final days in the trenches of Petersburg and eventual surrender. The successes of the Sharpshooter Battalion during the "Overland Campaign "in early 1864, convinced General Lee to mandate that all Infantry Brigades would be required to form Sharpshooter units of their own. These men received special training that included long ranged target practice and soon were recognized as the elite troops of each Brigade. As the war dragged on, it was the Sharpshooter Battalions that became the primary fighting force of the Confederacy, especially in the Shenandoah Valley and around Petersburg. In fact, they were the ones that led the last attack of the war for the Army of Northern Virginia at Fort Steadman, on March 25, 1865.

This is not just a cursory description of the various field actions, but rather an in depth study that takes the reader onto the battlefield where we hear the banter between the lines, rush forward in a hotly contested skirmish, and learn what it meant to serve on the front lines during the last years of the war. This understudied aspect of the war is deftly handled by the author and the reader comes away with a comprehension of how an undermanned, half starved, ragged band of men adapted to their new reality, modifying tactics, innovating and ultimately developing methods that would serve as a model for warfare into the following century.

Insightful, detailed, and exciting are words that best describe "Shock Troops of the Confederacy". For those that are looking for a better understanding of the transition from Napoleonic tactics to the smaller, task orientated, combat units of the 20th century, this is a "must read". Well researched and referenced, this scholarly work is quite readable and should be added to the library of all Civil War enthusiasts.
You got all that?  Good.  Go buy a copy!