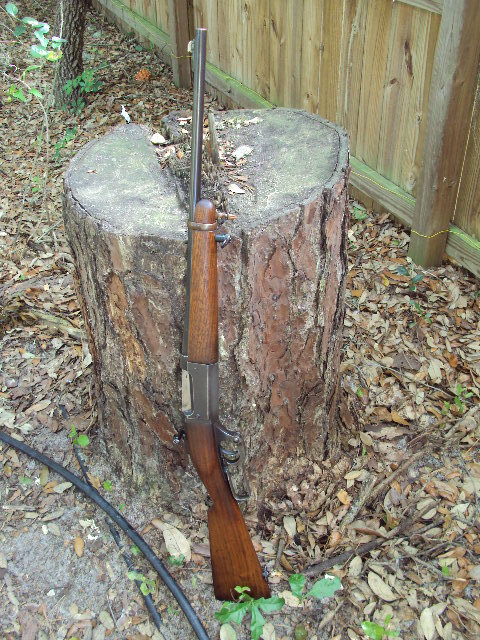 Well, I finally let that old but new to me Savage 99 follow me home.  Que Brittany Spears singing "Oops I Did It Again."   Net cash out was $Zero. I traded a more valuable gun even for it. On the surface, that sounds stupid but I had little money in the more valuable one and it was chambered in .416 Remington Magnum. Since I was rear-ended by a space cadet who was driving her cell phone instead of her SUV, I haven't been able to shoot it. Besides that, we have few elephants or cape buffalo in these parts anymore.

Mine is well-used but not abused. The action is tight and the trigger is smooth. The original buckhorn rear sight is gone but a Redfield receiver sight sits behind the bolt right where it needs to be to make a perfect “ghost ring.” The bore is bright with sharp rifling. Case coloring is still there on the lever and blueing is worn on the bottom of the receiver from being carried.  Someone before me installed a ghastly set of detachable sling swivels and had it drilled and tapped for a scope so the collectability is gone. She's no safe queen but that just makes me like her in a different way.  We will hunt together.

I like these old guns. The wood and metal work are better than what you find on most new guns (unless you are talking about spending enough to buy a used pickup truck) but there's something more. One day, well before World War 2, somebody walked into a hardware store, looked over the various guns and decided that this one had found a home. Maybe there were Winchesters or Marlins on display with it and he bought this one in spite of its higher price. (Savages were expensive guns back then). Maybe it was a gift from a wife to a husband. Maybe from parents to a child.  I'll never know the particulars but the small mysteries like that are worth pondering in a tree stand. Did the owner go off to serve in WW2? Did he scope it or did he hand it down to a son, or maybe a grandson who did? Did he get bit by Magnumitis and prop the old girl in the back of a closet for 50 years or did he just use her until he, himself was too used up to hunt anymore? I'll never know. Nobody will but she carries the marks of a life or two. What I do know is that the gun was cared for. Despite being carried so much, the bore is bright, the action is tight and the trigger is smooth.   I hope I can care for her as well until I am used up too.
Posted by Lantry at 5:02 PM