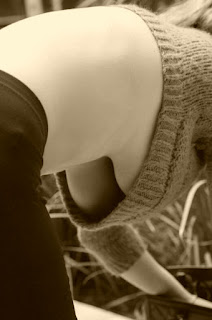 While in 1985, the ability to capture such a "view" on film would have been a miracle, it is forever etched in my mind.
We were doing a big telecom cable job for the state's largest bank, requiring a larger than normal crew. We got some installation techs to help us out, including a couple of female techs, Debbie and Sally. Debbie was prettier, but Sally had a great bod including a nice rack. Sally was on the ladder above me feeding the cable bundle through an access hole in the floor above, and I was busy managing the spools so it fed smoothly. When they stopped pulling above, I went to the base of the ladder to ask Sally what was up. When I looked up to talk to her, THAT photo you posted was the view I got. I kept it to myself.